Breakthroughs in modern biomedical research are largely driven by rapidly evolving genomics technologies. The NUSeq Core is a state-of-the-art core facility that provides genomics and bioinformatics support to investigators at Northwestern University, affiliated institutions, and external academic and commercial institutions. The major technologies available at the core are listed below:

With the power to sequence millions to hundreds of millions of DNA fragments simultaneously in a matter of hours or few days, NGS has been the major driving force in life science and medicine in the last decade. The sequences (or reads) generated from the DNA molecules can be used to assemble new genomes, while more often they are used for mutation or variation detection, differential gene expression analysis, detection of protein-DNA interaction, epigenomics, and environmental microbial diversity profiling.

Northwestern investigators continually pioneer new strategies to solve their research questions with NGS. To meet the sequencing needs of our users, NUSeq maintains a fleet of major NGS systems, summarized below. If your project requires a different NGS platform, please notify us as we are constantly working to build our capacity. 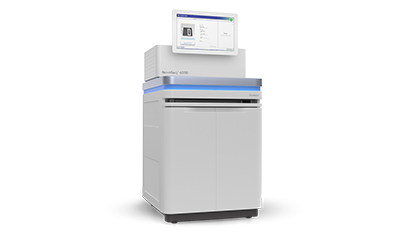 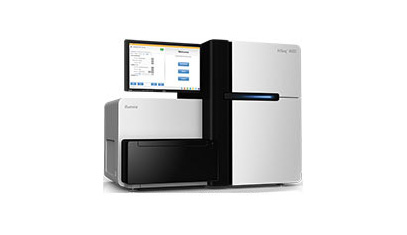 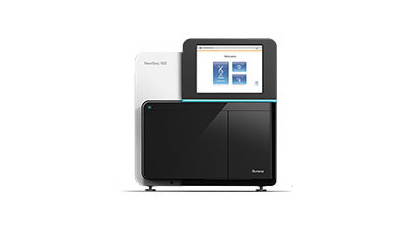 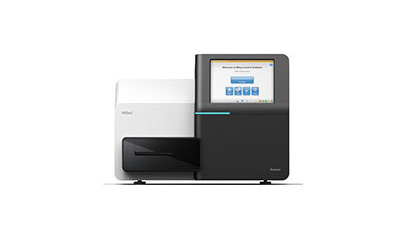 Microarray was the first high-throughput genome technology developed in the mid-1990s. It was originally invented for gene expression profiling, but its application soon diversified into other areas, including genotyping and DNA methylation analysis. As attested by the large amounts of data deposited in major genomics databases such as Gene Expression Omnibus (GEO), microarray technology has significantly advanced high-throughput genome research for over two decades.

Microarray is based on hybridization of pre-designed nucleic acid probes to molecules present in user samples. Signal readouts from the hybridization are then used to analyze gene expression pattern, DNA sequence polymorphism, DNA methylation, etc. The NUSeq Core provides support to two of the most widely adopted microarray platforms: the Illumina BeadArray and the Affymetrix GeneChip systems. The Illumina BeadArray technology creates an array with specially prepared, probe-carrying microbeads, which self-assemble into microwells etched into a substrate. Affymetrix GeneChip uses DNA probes synthesized in situ using photolithography, a process similar to that used for manufacturing semiconductor chips.

The NanoString nCounter Sprint Profiler — a new addition to NUSeq (as of September 2020) — is a platform for multiplex analysis of up to 800 RNA or DNA targets. For common pathways or bio-functions, NanoString provides a number of ready-to-use, predesigned gene panels, including those for oncology, immunology, and neurobiology. In addition to the catalogued gene panels, NUSeq Core users have the option of designing custom panels based on specific needs. This system is ideal for studies that interrogate genes in a particular pathway or bio-function, or to validate expression pattern of a group of genes after global gene expression profiling with RNA-seq. The system also enables detection of gene fusions using junction probes, analysis of miRNAs, and simultaneous measurement of DNA/RNA/proteins.

NUSeq maintains the Bio-Rad QX200 ddPCR System, which has the capability to generate 20,000 individual PCR reaction droplets from a 20 ul PCR reaction. After PCR, all droplets are examined by the droplet reader for presence or absence of amplification signal. The percentage of positive droplets are then used to calculate the absolute copy number of the target DNA/RNA molecule(s) in the original sample on the basis of Poisson statistics. 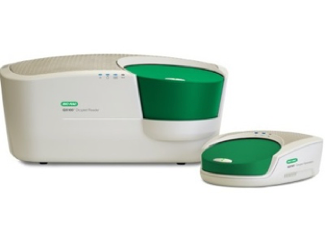 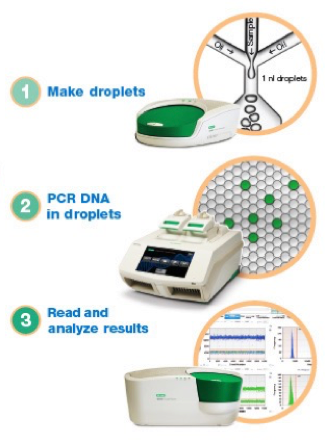 (above) The Bio-Rad QX200 ddPCR System and the steps of carrying out a ddPCR experiment. 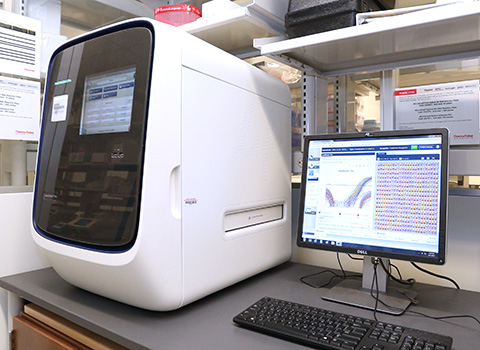 NUSeq uses the GenePrint 24 System from Promega for our STR-based cell line authentication. This system is based on co-amplification and five-color detection of 24 STR loci as shown below.

High-throughput DNA extraction is offered on an automated platform (AutoPure) to accommodate projects that require large numbers (e.g., thousands) of DNA samples to be extracted, or those that require DNA extraction on an ongoing basis. Accepted sample types are blood, buffy coat, saliva, and buccal swab.

Core-prepared or user-submitted samples are qualified and quantified using a variety of means, including Bioanalyzer, Fragment Analyzer, and Qubit.